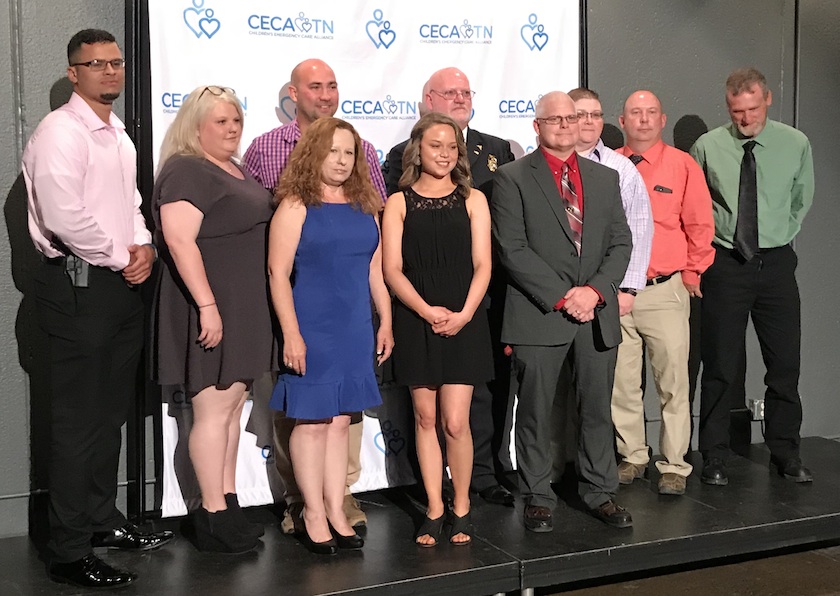 Children’s Emergency Care Alliance of Tennessee (CECATN) recognized Monroe County 911 Dispatch, Monroe County Sheriff’s Office and Monroe County EMS at the Tenth Annual Star of Life Awards Dinner and Ceremony as the State Award in Nashville at Rocketown on Thursday, May 18th. The mission of CECATN, the host of the Star of Life Awards, is to ensure that every child in Tennessee receives the best pediatric emergency care in order to eliminate the effects of severe illness and injury. The ceremony reunited the EMS personnel on stage as the narrative of the EMS call for saving James Bernard Johnson’s life. The Star of Life Awards are designed to honor Tennessee’s excellent prehospital providers for their lifesaving care. The evening recognizes these crews who are on the front lines of emergency care. Below are the recipients for the Michael Carr, MD State Star of Life Award:

A 911 call for cardiac arrest was received. This night put to the test the response of Monroe County’s first responders and EMS provider. This call was different than the rest because it was their colleague, James Bernard Johnson. All of the responders on this evening handled this with courage, compassion, and strength that comes from many, many hours of preparation. Each responder worked as an integrated team member to provide exceptional triage, patient care, and expedited transport in a very challenging emergency situation. Through their exemplary work on the scene and in the emergency department, BJ Johnson survived this life-threatening event. 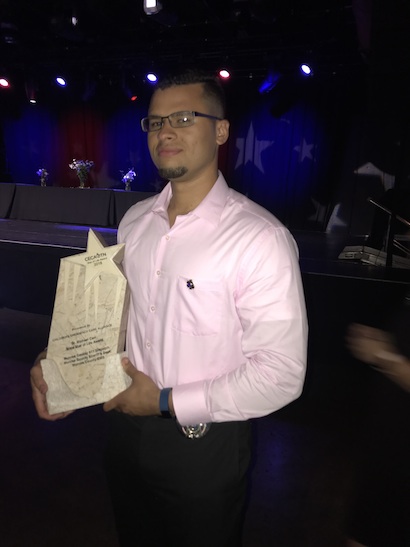 Deputy Trey Kilby with the Award 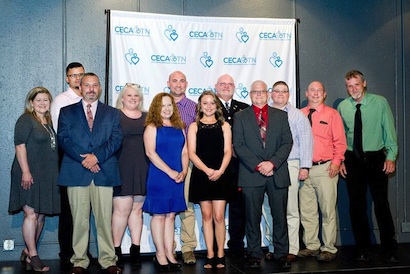 Here is the complete story:

When a rescue team personally knows its patient, there is a greater urgency and heightened awareness. This is a story of a 9%. You see statistics show that only 32% of all cardiac arrest victims get CPR from bystanders, and of that 32%, only 9% survive and very few of those actually return to work.

The Emergency Services are tight in Monroe County, they are a family. EMS, fire departments, law enforcement, dispatch, and first responders share a uniquely strong working relationship, but the strongest relationship is between EMS and the Monroe County Sheriff's department. More often than not, the Sheriff’s Deputies are helping EMS much more than they realize. They work hard to protect EMS while they do their jobs and while keeping this community safe from harm. There's never a question as to whether they'll help, they can be counted on.

It was a cold and rainy early morning, November 3rd 2017; a 911 call was received by Heather Moses at the Monroe County 911 Dispatch Center. She dispatched Truck 434 to respond to a patient in cardiac arrest, who is not breathing and has no pulse. “That's my neighborhood,” said Paramedic Eddie McCormick. Truck 434 with Paramedic William Cross, Paramedic Eddie McCormick, and AEMT Joe Hall, checked enroute, followed by truck 432. While both ambulances were racing to the scene, Deputy Trey Kilby heard the call, and he responded as well. When Deputy Kilby arrived he found the patient’s wife, Kim, performing CPR, he immediately took over until EMS arrived. A total of four minutes passed from the time that the 911 call was received until EMS arrived on the scene. When EMS arrived, they quickly moved the patient to the floor and took over CPR. They all worked tirelessly in the patient’s home ... IV access, CPR, secured airway, CPR, medications, Lucas device, CPR. A total of 5 defibrillations were delivered in the house, the first of which was delivered 5 minutes after the call was dispatched, but he was still in V Fib. Word traveled fast in those first few minutes, more officers arrived to help. This time it was for a brother in blue, BJ Johnson. At 60 years old, BJ Johnson is a Drug Interdiction officer for the Monroe County Sheriff’s Department. He is an incredible warrior in Tennessee's and Monroe County's War on Drugs. With the assistance of the officers on scene who had gathered to help CPR continued and BJ was moved to the ambulance along with all of the EMS equipment. Dispatch contacted LifeStar but they could not fly due to weather.

With BJ still in V Fib the fight was still on. Only 20 minutes since the call was first dispatched, the ambulance went enroute transporting Emergency Traffic to Sweetwater Hospital, the closest facility, which was approximately 12 miles away. The crews were giving every shred of strength and every ounce of skill to save BJ’s life, all while racing the clock and the hazardous road conditions because of so much rain. Upon arrival at the hospital, BJ was still in V Fib. The ER Staff immediately joined in the fight.

Together, the EMS crews and the hospital staff fought tirelessly together, side by side. Statistics show that 9% of them survive and BJ was still in V Fib and medical options were running out, having been tried already and hope was fading. Then, just barely, ever so faint, there was a pulse. 9% in a world where life and death battle daily where the likely things sometimes don't actually happen, where we battle death against all odds, where sometimes, in the middle of sheer terror and chaos, God shows us a true miracle, our brother BJ had a pulse.

BJ had a pulse, but he was still in very grave danger. All at once they were faced with a now-or-never decision BJ had to be transferred to the CVICU at UT Medical Center in Knoxville but LifeStar could still not fly due to bad weather, so he would have to go the almost 50 mile trip by ground in the bad weather. They loaded BJ into the ambulance, along with a paramedic and a nurse from the hospital and the race began again, the rain, skill, time, and miles of pavement were battled.

So began BJ’s miraculous new story - a story of true family, of cooperation, of strength, of immeasurable skills put to the test for the love of a brother. A story against all odds, of how big 9% really is, of louder and louder prayers, of rehabilitation and healing, of a family that was tightly knitted before, but drawn even closer by the love for and of a brother in blue.

Our brother is back at his family home, loving his wife, children, and their grandchildren. He is back out working and fighting a war on the interstate to make the world a cleaner, safer, less-drug-infested place for all of us.

It is for this team effort that the Dr. Michael Carr State Star of Life Award be given to Monroe County’s 911, Monroe County Sheriff’s Department and Monroe County EMS. Mr. Johnson is not able to attend tonight but the team will deliver him his certificate that states: “It is hereby certified and solemnly attested that BJ Johnson survived a life-threatening event on June 5, 2015. This certificate commemorates the first day of the rest of your life.”